See us at the Straddie Oyster Festival this Saturday

Ambar Hill is proud to be attending the Straddie oyster festival. We will be serving our Chardonnay Verdelho which is the perfect crisp accompaniment to local oysters.
A little about the festival....
The Straddie Sharks Rugby League & All Sports Club at Dunwich will showcase the cream of the crop of Straddie oysters, presented by The Stradbroke Association of Oyster Farmers, this Saturday 10th December when it holds the “Original Straddie Oyster Festival” at Ron Stark Oval at Dunwich for the 3rd successive year at its new home.
The day will commence at 10am with the Traditional Official Opening and Welcome to Country by Quandamooka Elder Aunty Margaret Iselin. That will be followed by some traditional dances by the Minjerribah Dance Group from Stradbroke and a visiting New Guinea dance troup.
The usual Competitions of Oyster Opening (shucking), Oyster Eating, Prawn Peeling & Eating, etc. will be held over the day which is planned to wind up at 6pm. People will also be able to try their hand at Oyster Cutting and Turning for Presentation AFTER the oysters have been opened by the professional oyster Farmers.
This year there will be a Classic Car & Motor Bike Show which will feature the replica Jim Beam V8 racing Car for the Rev. Heads in the crowd, Fun Rides for all the children along with oodles of new Market Stalls and Live Music all day along with our loyal Celebrity Comperes Spencer Jolly and Bruce Paige leading the proceedings.
As a special addition this year Fino Food + Wines will be sponsoring sponsoring Oyster & Seafood Cooking Demonstrations by Executive Chef “Shin” from the well known “Sake” Restaurant in Brisbane. This is expected to draw special interest from the cuisine conscious in the crowd.
There will be a huge selection of foods and beverages available from stalls around the ground and don’t forget to bring your empty Eskys to take home a selection of the fresh local Straddie seafood which will be available for sale .
You will also have the opportunity to win a 5 night stay at Anchorage Village , plus a free return vehicle ferry car trip with the big raffle on the day, be sure and buy your tickets. These prizes have kindly been donated by our sponsors Anchorage Village and Stradbroke Ferries
A boat will run from the Southern Moreton Bay Islands including Coochiemudlo departing Russell Island at 10.30am then via all other SMB islands direct to Dunwich. Phone 3409 9216 to book a place on this as spaces are limited. It will return to SMBI departing Dunwich at 5pm. Fares for this service are Adults $15, Children/Pensioners $10 Return. Mainland visitors transport will be well catered for by catching the Stradbroke Ferries water taxi or vehicle ferries from Toondah Harbour, Cleveland which will drop off at their Dunwich pontoon which is a 2 minute easy walk to the Ron Stark Oval and the Festival. Boats run just about hourly but phone 3488 5300 to check timetables.
Posted by Ambar Hill at 13:37

A vineyard would have been fun when I was 15 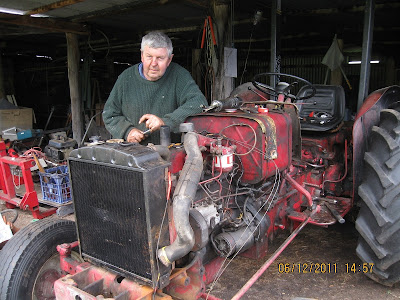 And Compliments of the Season
Celebrate Christmas with our special dozen, only $120 delivered Brisbane and Stanthorpe (add $15 delivery elsewhere in Australia). Enjoy a couple of reds with the boxing day bbq, some fabulous crisp whites for a Christmas summer lunch and a bottle of fortified for the pudding.

ORDER NOW AND WE CAN DELIVER BEFORE CHRISTMAS.

Extremely elegant cool climate shiraz with great fruit flavours and over all balance. Described by leading wine writer Tony Harper as having “a seamless, plush texture...”. Brisbane News praised its “Rhone like qualities” The only Queensland wine in Courier Mail’s list of best value Australian wine for including in a wine cellar.

Picked very late - on 17 April. It was very ripe with luscious fruit with very high baume but as a result the ferment left a little residual sugar. Halliday said it was over the top. He was right, but it still won a medal at one of its only outings. It has produced a cool climate wine with a voluptuous taste leaving a slightly sweet finish. It is on quite few restaurant wine lists. Great for the Boxing Day bbq.

The season started with frosts in November, then drought stressed and reduced the crop. However, it has produced great flavours. The wine was fermented in new French and American oak barrels purchased specially for this premium wine. Des Houghton’s Courier Mail pick for Christmas dinner 2009 and still winning medals.
Awards

New England Wine Show 2009 Class 19 bronze
2 Reserve Chardonnay 2008
The Granite Belt is demonstrating that it can produce some of Australia’s best chardonnays. The grapes were excellent, hand-picked and sorted. The wine was fermented in new French oak barrels. It is quite flinty in a classic Chardonnay style – perhaps unfashionably over oaked. It will keep for many years and more fully integrate the fruit and oak. It received a commendation at the world’s most prestigious and influential wine competition – the International Wine Challenge in London.
Awards
Australian Small Winemakers 2010 Class 3: Bronze
International Wine Challenge, London 2010 : Commended
New England Wine show 2011: Bronze 1 Shiraz 2008
Awards
Gold Medal Class 9 New England Wine show 2009

Trophy for Best Young Red Wine of the Show New England Wine Show 2009
2 Chardonnay Verdelho 2010 A signature wine blend for the Granite Belt. It has equal quantities of Chardonnay and Verdelho. Crisp and fruity – a summer wine.
ORDER AND ENJOY
Payment by cheque or BSB
An invoice will be issued on dispatch
Posted by Ambar Hill at 22:02

It is early spring at Ambar Hill.  The vineyard still looks dormant.  But the wild peaches are in full flower, and behold in the vines the magic of another vintage has started: the first shoots on the verdelho have appeared. 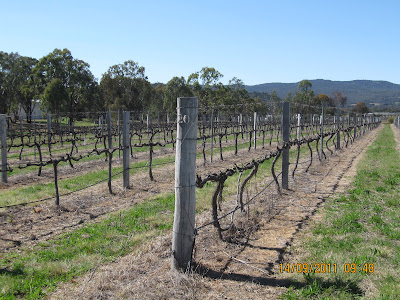 Spring is sprung at Ambar Hill 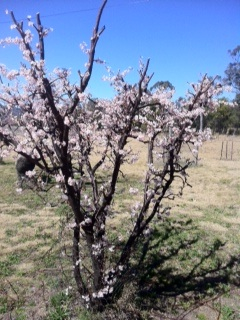 The first plum is in flower and the Granite Belt will be blossom full over the next few weeks.  Spring is a magical time to visit the Granite Belt, with all the orchards in blossom as well as the  areas famous wild flowers.  The days are sunny but the nights are still cold enough for a log fire.
Book Ambar Cottage in the heart of the wine growing district to enjoy a classical spring.  Sunny days, some frosts in the morning, fruit trees in flower and some great wines.
Call Judy 0407143749 for bookings
Posted by Ambar Hill at 17:02

Winter Dozen Special $120 :
Includes GST and delivery in Brisbane and Stanthorpe. Add $15 for delivery elsewhere in
Australia.  (Normal retail prices are shown)
2 Chardonnay Verdelho 2010   $11.00
Huge fresh pineapple and passionfruit nose and lovely big fruit flavours –but actually
fermented very crisp and dry. A fantastic and elegant summer alternative to the now ubiquitous sauvignon blanc.
2 Shiraz 2008  $16.00
Very late harvest, very high baume.
Awards
Gold Medal Class 9 New England Wine show 2009
Trophy for Best Young Red Wine of the Show New England Wine Show 2009
1 Chardonnay 2008 $19.00
The grapes were excellent, hand-picked and hand sorted.  The wine was fermented in new
French oak barrels. It deserves several years of bottle age to fully integrate the fruit and oak.
It is quite flinty in a classic white Burgundy style – perhaps unfashionably over oaked for
Australian tastes.   But it received a Commendation at the 2010 International Wine Challenge
in London, regarded as the largest and most prestigious wine show in the world.
Awards
Commendation, International Wine challenge, London 2010.
Australian Small Winemakers 2010 Class 3: Bronze
2 Shiraz 2007 $14.00
Again a very late harvest.  Well awarded.  It was bottled very cold and bottles were sparged
with CO2 to keep total freshness.  Some bottles are releasing a little of that dissolved CO2 on
opening so we recommend decanting at least 10 mins before drinking to allow the CO2 to
dissipate.  Australia’s premier wine magazine awarded the maximum five stars.
Awards
Wine State Magazine
New England Wine Show 2008 Bronze
Queensland Wine Awards 2008 Bronze
Winestate Magazine best of 2009 Annual 2010 Edition
2 The Samuel Bailey 2007  $14.00
A reduced crop was effected by both the extremely cold start to the season with snow and
frosts in November, then stressed by the drought.  However, it has produced intense flavours.
The wine was fermented in new French and American oak barrels purchased specially for this premium wine.   Courier Mail’s Des Houghton reviewed it as his preferred wine for Christmas day 2009.
Awards
Winestate Magazine: Best of 2009 Annual Edition 2010  4.5 stars
Queensland Wine Awards 2009 Bronze
Australian Small Winemakers Class 44 2008 Bronze
New England Wine Show 2008 Silver
Cowra Wine Show 2009 Class 76 Bronze
Wine State magazine      4 1/2
Cowra Wine Show 2010 Class 34 Silver
Australian Small Winemakers 2010 Class 45 Silver
1 Stirling Mountain Vintage  2007 Fortified Shiraz   $23.00
We picked a small quantity of very ripe shiraz late in May for a vintage fortified shiraz.  It is
excellent and will be released over the next 2 decades.
Awards
Australian Small Winemakers 2009 bronze
New England Wine Show 2009 Class 19 bronze
1 Shiraz 2006 $10.00
Picked very late - on 17 April – perhaps one of the last Shiraz pickings in Australia.  It was
very ripe with luscious fruit with high baume but the ferment left a little residual sugar. We
debated its future, as it is totally out of character for us - but decided to bottle anyway.  It has
produced a cool climate wine with a voluptuous taste leaving a slightly sweet finish. A wine for the mistress not the wife.
Awards
Queensland Wine Awards 2007 Bronze
1 Shiraz 2005
Extremely elegant cool climate shiraz with great fruit flavours and over all balance.  Described
by leading wine writer Tony Harper  as having “a seamless, plush texture..” and “irritatingly”
cheap....  Brisbane News praised its “Rhone like qualities”. The only Queensland wine in
Courier Mail’s list of best value Australian wine for including in a wine cellar.
Was listed on many Queensland restaurant and hotel wine lists.  Sold out – this is from our own cellar.
Awards
Queensland Wine Awards 2007 Silver
Royal Agricultural Society of Qld 2009 Class 10 Bronze
Queensland Wine Awards 2009 Silver
Please email at gldalton@bigpond.com for orders.
Ambar Hill Wines Vineyard and Winery: 364 Mt Stirling Rd, Glen Aplin Q4381 Australia
www.ambarhillwines.com.au
Posted by Ambar Hill at 01:44